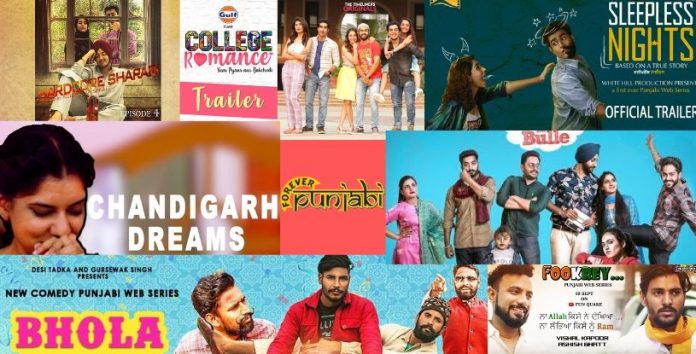 If you’re bored of watching web series on Netflix, Amazon Prime or any other digital platform and want to experience something related to your Punjabi culture then check out the list of top 10 Punjabi Web Series available online on YouTube. From comedy, action to romantic drama, all these Punjabi Digital series bring out something for every type of genre. Interesting stories, well-skilled characters, and impact-worthy dialogues are just that will keep you stick to watch the complete series. Even some of these are so interesting that people just can’t wait for their next season to come live. Furthermore, to make your search hassle-free for best Punjabi web serials, we have compiled a complete list of the top 10 must-watch Punjabi Web Series which should not be missed. So, get ready to have a powerful dose of entertainment with an enriching experience.

Story Overview: With full-on love, romance, humor, and thrill, Ishq De Bulle is one of the most popular Punjabi web series today. It is based on a compelling story of a group of friends. The show’s theme is so truly commendable and one can connect with it as it displays real-life stories.

This is one of the first Punjabi web videos on YouTube, which we believe is the 2nd most favorable by Punjabi Cinema lovers. This show is published under the banner of Moz Studios. The official trailer had been launched on YouTube on 22 March 2019. The trailer of Ishq De Bulle Punjabi Series crossed more than 5 Lakh views as soon as it released. The entire star cast in this series performed very well and they justified their characters with genuine performances.

Review: It creates a great impression on Punjabi lovers as the best ever official web series on YouTube. So, don’t forget to watch it on YouTube and before watching the complete series, go check Ishq De Bulle trailer to get a clear idea about the story theme. We are sure after watching it you will definitely gonna love this truly unique story as it has already been winning hearts of Punjabi lovers across the world. It will be worth watching if you watch it with your gang of your friends!

Story Overview: The Yaar Jigree Kasooti Degree Indian Punjabi-language comedy-drama web series which is truly based on the life of university students. The web series displays the fun-loving and exciting life of college students. It brings their day-to-day life experiences related to different kinds of situations and people.

Written and directed by Rabby Tiwana, this popular Punjabi Web Series is also co-produced by Media International and Troll Punjabi. The series established itself as one of the most favorite Punjabi web-series among today’s youth. The first episode of this series was aired on September 15, 2018, and its first season was concluded on December 30th, 2018 on YouTube. All of its episodes received great appreciation and viewed millions of times on YouTube.

Review: This show has turned out to be the first Punjabi Webs series successful officially. With millions of views on YouTube, this show has become the highest followed among a lot of Punjabi lovers. The entertaining music of this series also plays an important role in its success.

Story Overview: The Punjabi Web series gangland in Motherland highlights the distressing gang culture spreading extensively across Punjab. Additionally, it also represents the reality and truth of today’s world and shows how the current generation is driven to illegal activities.

This web series has hit the web with its amazing start casts such as Mehtab Virk, Vadda Grewal, Nishawn Bhullar, Japji Khaira, Yaad Grewal, Victor John, Navdeep Kaler and many more actors/singers from Punjabi industry. To date, 3 of 5 episodes of this web series have been released on YouTube. The great endeavor taken by the director Gabbar Sangrur has appreciated by the youth of Punjab. The storyline of this web series revolves around the 2 anti-gangs youth of a college in Punjab who gets into a repeated dispute resulting in legal issues that cost one of the gang heads his freedom.  The best part of this series that impresses us the most is its camera work. The brilliant shots taken in this series have made it a delightful visual treat. What’s more surprising for us is that the director of Gangland in Motherland, Gabbar Sangrur has worked tremendously at his debut directorial project. So, if you still haven’t watched this entertaining Punjabi Web series, then you should watch it right away!

Review: The subject of this series is quite intense and intriguing, however, its direction, action, and execution is immensely great. It has entered into the hit list of favorite series among the Punjabi lovers. The unparalleled success of this show has made the Punjabi Movie Industry stronger than ever and taken it to the new heights of the digital world.

#4  I No Angreji – Punjabi Web Series

Story Overview: These hilarious Punjabi web series take on Punjabi youth inclined to move abroad. The story sets in an IELTS institute and revolves around a group of misfits who desire to settle down abroad but their lack of command over the English language becomes the barrier in fulfilling their wish. Their funny acts while preparing for the English examination makes this series truly worth watching.

Review: Since the storyline of this series is based on today’s situations of the youth of Punjab, so, it seems quite connected and believable. Full of hilarious comedy, this should be on your must-watch list if you or any your friend wishes to fly abroad

Story Overview: The web series truly define its name. This is a story of friends studying in the same college. They are struggling to define their career goals and between this, they get fall in love affairs. The story revolves around BFF’s Karan, Naira and Trippy’s college life and their different perspective towards love relationships. Trippy daydreams and always tries to attract his new crush, whereas Karan is a bit confused about his and girlfriend Deepika’s relationship. And, Naira is a character who is showing them a clear vision about the reality of love relationships. It is a comedy series displaying college life in brief and seems realistic. The love stories and ridiculous romantic acts will take your mind blow away.

Review: Full of humor, turns and twists, this is a must-watch web series for every college-goer student. It is a realistic portrayal of friendship that every student will feel connected to it. So, you will not get bored while watching it as there is no typical drama of a couple of romance.

Review: It is a compelling drama web series with an ensemble star cast. You should definitely watch it if you ever wish to staying and studying in the beautiful city – Chandigarh. It is directed well with all the fascinating aspects of the city with real life-based day to day situations.

Story Overview: This is a unique story that deals with love, religion, and friendship. Basically, it revolves around a small group of young friends who come from different religions. The story is all about how they manage to propagate a lesson to go for love instead of religion and this is the unique theme of this web show.

Review: With a powerful and unique storyline, this web series is laced with a range of emotions. You must watch it if you’re looking for an extraordinary and distinctive narrative in terms of digital series.

Story Overview: The story of the web series Sleepless nights revolves around a young couple – Bunny and Shefali. This is extremely loving and cheerful story that brings a tragic turn that changed the life of the couple. In the beginning, it appears to be a happy and loving story of chirpy love birds, but sadly the story brings a nightmare into the life of the two. The story continues, as

Bunny keeps on experiencing is lady love tortures and hide all from his parents and even lied to them. Shefali makes Bunny her love puppet, with her dominating behavior. She shows up various mood swings, sometimes very dangerous and how Bunny tries to impress her, convince her, please her and get out from the situation while stopping her to do anything wrong. The end of this series brings a thoughtful message that how communication gap between children and parents can ruin the lives of both. So, we all need to think about it immediately.

Review:  The story of this web series delivers a strong message to today’s society about the emerging gap between today’s children and parents. Thus, creates it truly a family show where every family member plays an important role.

Story Overview: The story plots around the young lad from the village who desires to become a popular Punjabi singer. He does everything to bag the title of best singer once in his lifetime. His daily struggle to achieve his dream constitutes the main storyline of this Punjabi Web show.

Review: This web show receives decent appreciation, and the credit goes to its star cast as well as the story and dialogue writer. The stunning execution of the show further adds stars to its success. If you’re also struggling hard to fulfill your dreams, you should definitely watch this Punjabi Web series.

Story Overview: This is a youth-oriented web show that plots around a young boy from who is addicted to alcohol. He is very fond of theatre-acting and never leaves any opportunity to display his talents while experiencing different situations in his life.

Review: A light-hearted web show filled with a range of comedy punches and funny acts. If you’re bored from your day to day hectic schedules, just take a break, and watch this hilarious comedy-drama of a Hardcore Sharabi.

There is no doubt that the Punjabi Entertainment Industry has established a strong position for itself in today’s digital game! All thanks to the streaming partner YouTube and reasonable online facilities. It shows plenty of great web shows for free on various high-end digital platforms. Watch your favorite Punjabi Series mentioned above anytime, anywhere on YouTube. Now, what are you waiting for? Go ahead and stream your favorite Punjabi Web show on YouTube now!