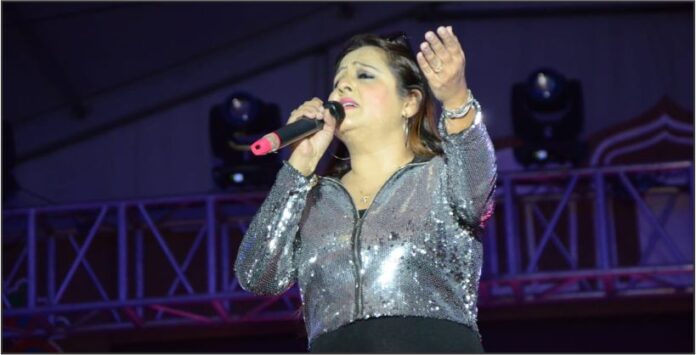 Kiran Kaur a Punjabi singer has been focusing on bringing back the magic of Punjabi folk to the fore through her soulful voice. With an aim to revive the earthy charm of Punjabi folk songs in the new age of modern music, the Awaaz Punjab Di fame singer who also recently performed at a 14-day festival in Lucknow, ‘Hunar Haat’, organized by the Ministry of Minorities, under PM Modi’s initiative ‘Vocal for Local’, is lending her voice to iconic Punjabi folk songs like ‘Jutti Kasuri’, ‘Buhe Baariya’, ‘Ajj Di Dihadi’ etc. The lyrics will be as in the originals, however the music will be ‘remixed’ and presented in a new avatar.
Kiran Kaur said, “Punjabi folk is ‘evergreen’. It evokes the true essence of Punjabi culture & history in it. The lyrics & music will not just touch the soul of youngsters, but will also keep them connected with their roots.”
Kiran Kaur added, “I think the youth -particularly Punjab’s youngsters, are being doled out Punjabi songs that most of the time promote weapons, objectify women and glorify materialistic possessions. This might not be true for all songs but many of the current Punjabi songs are creating a very ‘showy’ & parochial picture of Punjab & its culture. I personally believe that being a responsible artist I would like to revive Punjabi folk songs.”
To make the project a success Kiran Kaur has collaborated with ‘Supertone Records’, a renowned music promotion organisation mainly known for its repertoire of devotional songs. While Kiran Kaur will record the Punjabi folk songs of yesteryear’s in her voice  Supertone will release the songs on its YouTube channel.
Kiran Kaur further said, “We have already recorded some folk numbers. The folk songs being recorded are those sung by the ‘Nightingale of Punjab’ Surinder Kaur and Prakash Kaur – Surinder Kaur’s sister. Not only these, even other hits of Punjabi folk singers and also Pakistani singers are being recorded. Though the lyrics remain the same we are giving a modern touch to the music so that we are able to connect with the youth instantly.”
Kiran Kaur who will also be seen singing for Punjabi films, summed up, “I feel nothing can surpass this form of music, which has so much purity. What’s more, there is a great collection of Punjabi folk music right from the first day of its genesis. Truly, it makes us revisit our culture. And I am fortunate to be part of the effort aimed at bringing back the charisma of a bygone era.”