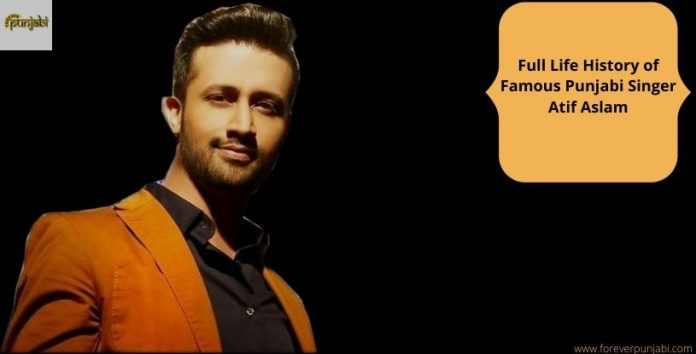 The heartthrob of today’s generation, Muhammad Atif Aslam is one of the most popular Pakistani Singer and On-Screen film characters. His astounding voice made him popular all around the world and is best known for his melodies with mind-blowing singing

He made his spectacular entry in Bollywood with the most famous song- Who Lamhe and Aadat. He cherished remarkable appreciation in Bollywood for his well-defined singing. He is not less than the rocking Indian Superstars.

Muhammad Atif Aslam is born and brought up in Pakistan. He was born in Wazirabad in Gujranwala district, Punjab State, in Pakistan on March 12, 1983. He is a Pakistani & Bollywood Singer, Film Actor, Song Writer, TV Personality Playback Singer & Musician and best known for his commendable work in Urdu, Hindi and English Movies

His father’s name is  Muhammad Aslam and Mother, Rehana Shaheen. He has three brothers, Shahzad Aslam, Shehraz Aslam & Shahbaz Aslam, and one sister-Romana, Aslam. His wife name Sara Bharwana since 2013 and both are blessed with a baby boy in 2014.

Atif Aslam was fond of cricket as well as music. Though he consistently appreciated Abida Parveen and Nusrat Fateh Ali Khan, his main interest was for cricket and he transformed his home inspired by cricket stadium. He used to be a fast bowler and his love for the cricket inspired him to take part in the national championship Under-19 cricket team trials

His companions encouraged him to pursue his career in singing and then, he began singing live in during his course of days at PICS. There, he met with sensational guitarist and young artistic musician, Goher Mumtaz. They created a group together named ‘Jal’.

Together they recorded their first song “Aadat” along with the collaboration of Salman Albert. As soon as its release, the “Aadat” song become one of the most famous Pakistani music created by legendary Atif Aslam.

Atif Aslam completed his childhood schooling at Kimberley Hall School, Lahore, Pakistan. He moved to Rawalpindi in 1991, where he pursued his further studies in St. Paul’s Cambridge School, Satellite Town, Rawalpindi. In 1995, he returned back to Lahore, where he continued his further studies in Divisional Public School. He has done his Bachelor’s degree in Computer Science (BCS) from Punjab Institute of Computer Science (PICS), Lahore, Pakistan

Muhammad Atif Aslam made his debut with a bang in Bollywood as an incredible playback singer with the most famous song entitled “Wo Lamhe” from the Hindi movie Zeher (2005). The thing that made Atif Aslam stand out from the crowd is that he sings only 1 or 2 songs in a movie, but that few songs always break the records of the chartbusters. His most famous Hindi songs include Tera Hone Laga Hoon, Tu Jaane Na from the movie Azab Prem Ki Gazab Kahani, Tere Liye from Prince, Pehli Nazar from Race, Aa Bhi Ja of Jayanth Bhai Ki Love Story, Tere Bin from Bas Ek Pal, and Jeena Jeena from the movie Badlapur. Apart from his singing career, he has also performed in music promos of these popular songs. Despite the fact that he sang only a handful of songs in Bollywood, his popularity among the youth generation and Bollywood Industry are skyrocketing high.

He also launched his various solo albums that also much appreciated by the audience. His first album in 2004-Jalpari was also a big hit and became popular instantly just after its release. That album proved a milestone for his career and made him ranked among one of the most sought-after singers. His next album Doorie released in 2007 and he won the Best Album Award for that. His next album Meri Kahani also needs a special appreciation as it was also one of his biggest hit albums to date.

He has also contributed a lot in the Pakistani music and he has rewarded with one of the biggest civilian awards of Pakistan, Tamgha-e-Imtiaz by the Pakistan government. In his career journey, he has also sung a few songs in Hollywood movies like Man Push Cart and The reluctant fundamentalist. He has millions of fans all over the world and people love him for his smashing hit numbers and live star performances.

Besides singing and live stage performances, he has also been a part of various reality singing shows as a judge. He is still entertaining the audience with his mesmerizing and soulful voice and we hope he continues to do so