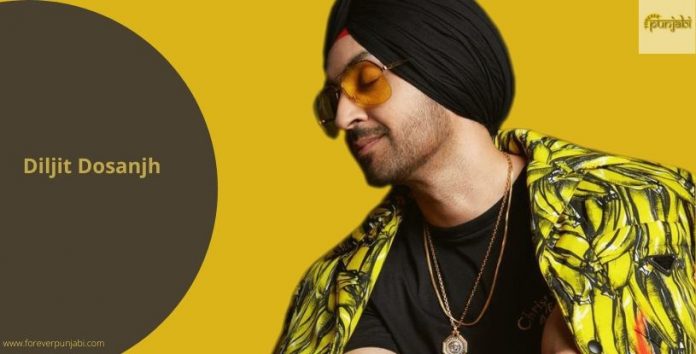 Diljit Dosanjh is one of the most leading Punjabi Singer today. He is such a marvelous Personality who has brought a revolutionary change in the Punjabi Music Industry. He is not only stood tall in the list of most famous Punjabi Singer, as well as he is also established a place for himself an in Best Actor. Along with singing and acting, he is also a good song composer. He has also begun his acting journey in Bollywood films.

Diljit Dosanjh Personal Life Information Diljit Dosanjh was born on 6 January 1984 in Dosanjh Kalan, Jalandhar in Punjab at Balbir Singh Dosanjh’s House. His father is a former bus driver at Punjab Roadways. His mother’s name is Sukhwinder Kaur, who is a homemaker. He has an elder sister and a younger brother named Manjeet Singh. He completed his 10th standard from Al Manar Public School,

Ludhiana. Diljit Dosanjh is married to Sandeep Kaur. Together the couple blessed with a son. His wife and son stay in the USA.

Diljit Dosanjh started his music journey by performing live Kirtans at Gurdwaras during his school days. Now he has established himself as the most popular as Punjabi Singer, Punjabi & Hindi Movies Actor, Song Composer, Dancer, Television Host, Musician, Voice Artist, Philanthropist as well as a Great Playback Singer & social media celebrity. He is best known for his tremendous work in Punjabi as well as Bollywood movies.

He debuts in Punjabi Film Industry with his first film ‘The Lion of Punjab’ in 2011. However, the movie didn’t get much response from the audience but his song “Lak 28 Kudi Da” got a lot of applauds from the nation. His second movie Jihne Mera Dil Luteya was paired with Neeru Bajwa & Gippy Grewal. That film received great success at the box office. It was just the beginning of his career. After that, he shot to fame and became a revolutionary star with his famous songs Dharti, Chustiyan, Proper Patola, Catty Eyes, Movies- Tere Naal Love Ho Gaya’, Jatt & Juliet’, etc. He has been consistently mesmerizing his audience with incredible music and acting performances.

He gave vocals for the song “Main Taan Aidan Hi Nachna” from Hindi movie Yamla Pagla Deewana 2 in 2013. He then was featured in ‘Proper Patola’ which is the 1st Punjabi song released on Vevo. His movie ‘Punjab 1984’ was a massive hit and even received a national award. He is the 1st south Asian artist visiting US headquarters of Facebook, Google, Twitter, Instagram and YouTube in one day.

He debuts his Bollywood acting journey with his first movie named ‘Udta Punjab in 2016. He was starred with Kareena Kapoor, Shahid Kapoor,  and Alia Bhatt. His famous song “Ik Kudi” in the film Udta Punjab created a milestone for his career.

He also worked in Hindi movie Phillauri (2017) with Anushka Sharma and Suraj Sharma. Recently, he was seen in Hindi Film -Arjun Patiala in which he was paired with Kriti Sanon.  His Punjabi Film- Shadaa (2019) break the records at blockbuster. His next Bollywood Film –Good Newz is all set to release on 27 December 2019.

Diljit Dosanjh is also a very socially active personality. He has worked as the Brand Ambassador for Coca-Cola for the state Punjab. He took part in the Flipkart Connect campaign for Punjab. He was also worked as the brand ambassador of Star Sports Pro Kabbadi- Season Four with Rana Daggubati and Puneeth Rajkumar. In his entire career, he has received many worthy awards for his incredible work in the music and acting industry.