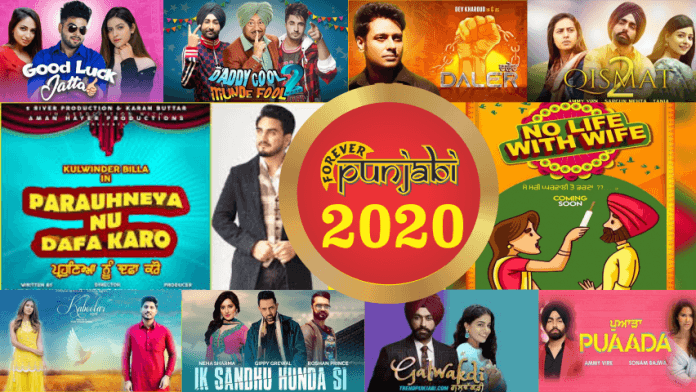 A new decade has begun, 2020 has arrived and there is a range Upcoming Punjabi Movies 2020 are going to be released to enjoy. The New Year 2020 has promised a lot more entertainment, more comedy, drama, romance, thrills, and action for Punjabi Films lovers. All your favorite Punjabi actors and actresses would be creating their charm on the big screen to keep you enthralled for the whole year. So, you must keep an eye out for these Upcoming Punjabi Movies 2020 to catch them as soon as they release at the theatres near you. So, let’s welcome 2020 with a bucket full of Punjabi Movies!  Check out all the biggest upcoming Punjabi movies that are all set to hit cinema screens in 2020.

The first Friday of the year and what a better way to start it with a comedy packed film with a lot of drama. Yes, you heard it right, we are talking about Comedy cum Drama Punjabi Movie ‘Jaan Toh Pyara’ featuring Rai Jujhar, Inderjeet Nikku, Mangi Mahal, Veena Malik, Sakshi Magoo, Yuvleen Kaur, Sardar Sohi, and Rana Jung Bahadur.  So, gear up to enjoy the laugh busters comedy-drama Punjabi film ‘Jaan Toh Pyara’ (release date -3rd January 2020) to stay happy for the rest of the year! The next Punjabi Film is Khatre Da Ghuggu which is all set to hit the theatres on 17th January. Gear up to watch this comedy ride with BN Sharma, Diljott and Jordan Sandhu.

Following the comedy-dramas ‘Jaan Toh Pyara’ & Khatre Da Ghuggu, the romantic film Jinde Meriye directed by Pankaj Batra is all set to release on 24th January at the theatres near you. Jinde Meriye starring Parmish Verma and Sonam Bajwa is a romantic love story based n their childhood wherein they fall in love with each other and decide to get married. But the girl’s family is not agreeing with their decision. They are against this marriage as the boy has no career prospects and challenges him to create a prosperous career on your own before marriage. But he decided to go on illegal ways to become successful, which puts their relationship at risk. Do you think the lovebirds will overcome their issues? Find all your answers on 24th January 2020 at the theatres near you! The last weekend of the month bringing the last one of the upcoming Punjabi movies in January 2020, ‘Gandhi Pher Aagya’ release date – 31st January 2020?

Starring Aanchal Singh and Dev Kharoud in a prominent lead role, Punjabi Movie-Zakhmi is a serious drama produced by comedian-actor, Binnu Dhillon and directed by Inderpal Singh.  There is not much information revealed about this movie yet but from is promising poster, the movie appears to be a serious drama. The Zakhmi-Punjabi movie is featuring a new debut actress – Anchal Singh. So catch it at the silver screens on the first day of valentine’s week on February 7, 2020.

Directorial by Rakesh Mehta, ‘Ik Sandhu Hunda Si’ Punjabi movie is starring Gippy Grewal and Neha Sharma in lead roles. Neha Sharma is a Bollywood Actress and she is all set for his Punjabi Movie debut with this film. Pawan Malhotra and Vikramjeet Virk will also be seen performing supporting roles. With the promo, it looks like a biographical thriller movie and will hit the cinemas on the 21st of February.

Punjabi Movie-Sufna movie release date is February 14, 2020. We can see Punjabi Popular Singer & Actor, Ammy Virk, and Tania as the prominent lead roles in this movie. Written and Directed by Bollywood Movie – Saand Ki Aankh Director, Jagdeep Sidhu. He shared the movie’s announcement poster on his social media platforms to make people aware about his upcoming movie ‘ Sufna’ release date in the 2020 year. We are assuming that the movie would be a kind of love story just like Punjabi Movie – Qismat and many more.

This is the second film going to release on the same valentine day and one of the Punjabi Movies in February 2020. The announcement poster has revealed the star cast of this film. The prominent lead role would be played by Ninja. The film also features Megha Sharma, Gurmeet Sajan, Sardar Sohi, Naira Kaur, Baninder Bani, and Rubina Bajwa as Amar Noori will be seen as one of the defining characters of singer-actor Ninja. The screenplay and dialogues have been written by Jatinder Lal. Good Luck Jatta is geared up to release on 14 February 2020.

The comedy Punjabi Film Parauhneya Nu Dafa Karo is starring Punjabi singer Kulwinder Billa and very charming Rubina Bajwa. Kulwinder is very excited for his upcoming Punjabi movie with Rubina Bajwa. The official poster has been revealed on his social media accounts. Directed by Amrit Raj Chadha and Produced by Ashu Munish Shani & Sandeep Bansal, this movie is promising to break the records of all Comedy Punjabi Films. Yet the release date of the movie is still not confirmed, but you must gear up to not to miss this entertainment basket.

Enjoy Rolling Comedy in a Row – No Life With Wife

Punjabi Film – No Life with Wife is a comedy packed film. Karamjit Anmol and Rajiv Singla will be seen in the lead roles. Karamjit Anmol has also produced this film. After the tremendous success of the film – Mindo Tasseldarni, he has decided to work in another Punjabi movie with Rajiv Singla. We have already seen Karmajit Anmol in various Punjabi movies. Since this movie is produced by him, so, let’s see what would be making this story unique among Upcoming Punjabi Movies 2020

Again Experience the Charm of Gurnam Bhullar in film- Kabootar

Punjabi Movies in April 2020 bring on board the Punjabi Fim – Kabootar.  After the great success of Punjabi movie ‘Guddiyan Patole” in 2019, Gurnam Bhullar again bagged a movie with the same director & teammates. Guddiyan Patole was the debut film of Gurnam Bhullar in Punjabi Cinema. Even the star cast has not been revealed yet but we came to know that the Film Kabootar is going to release on April 3, 2020.

Almost every Punjabi movie lover has watched the Punjabi Movie – Qismat. The songs of Qismat movie, star cast and storyline were just fabulous. The song ‘Je Mai Tere Kol ta fir Kaun Hovega’ created a unique place in Punjabi sad songs. The popularity of this movie compelled the director Jagdeep Sandhu to make the next version of Qismat movie. So, it has confirmed that you would again get to watch the story of fate, but the release date of Qismat 2 has not been confirmed. Stay tuned with Foreverpunjabi.com to check out details about upcoming Punjabi Movies 2020.

As we have seen Dev Kharoud in a plethora of Punjabi Movies. Now, he is back with his amazing thriller upcoming Punjabi movie Daler. Dev has already worked tremendously in various Punjabi films and we all are aware he is a spectacular actor. With his incredible acting, he has won the hearts of Punjabi Youth genre. The official poster of Daler Movie has been shared on his Instagram account. This means that we’ll get to again experience a serious thriller with Daler releasing on 22 May 2020.

Punjabi Movies in June 2020 bring at the top the film Puaada. With the great success of Punjabi film- Mukawa, the popular Jodi of Ammy Virk and Sonam Bajwa are all got to work together again in this movie. The film is directed by Rupinder Chahal, produced by Anurag Singh, Atul Bhalla, and Pawan Singh. The director has confirmed that the superstar’s starrer Puaada movie release date is June 12, 2020.

Galwakdi Punjabi Movie is all set on the floor and it is likely to be released by the manufacturers in 2020. Additionally, with the lead duo, actor B.N Sharma and Raviar will also seen in Punjabi cinema playing important characters in this film. The release date of the Galwakdi movie still not confirmed by the makers.

Punjabi Movie Industry has reached the top of the world. We had watched many actions, thriller, and comedy Punjabi movies but, the year 2020 will get something new or exciting movies with the best Punjabi comedian and actors like Binnu Dhillion, Jassi Gill, Tarsem Jassar, Gurnam Bhullar, Gurpreet Ghuggi, Sonam Bajwa, Sargun Mehta, etc. So, stay tuned with us and don’t forget to read the daily dose of Punjabi Movie industry updates which is fully loaded with the information that you want to read